Before I start this post, I want you to hear what one of my kids said after we played this game. She goes, “Miss Smith!! I just want to LIVE at school!! I mean, I LOVE SCHOOL!!! I could sleep here and when you come in the morning, I would already have my morning work done!”

I couldn’t help but smile. My students are loving learning this year. This group needs a little bit of extra help with reading and we have been playing many, MANY games to make it fun.
This week I introduced that mean and BOSSY E. I mean, how dare he?? He goes around pushing around all the other vowels and screams at them, “SAY YOUR NAME!!” 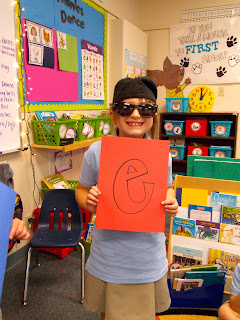 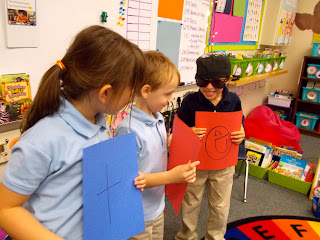 I brought in one of my hats and a pair of cool sunglasses and dressed up with a big construction paper letter e on my shirt and told them that I was bossy e. I went into into this big story about how I (bossy e) live at the end of words and you really have to look out for me.
I told my class that when you see me, (bossy e) I point and wag my fingers at the other vowel to “SAY YOUR NAME!!
We then talked about how words with one vowel are so happy! We mark them with a smile over them because no one is yelling at them!!
Then I had some helpers come up. I gave them construction paper with LARGE letters on them and we sounded out words.
The first student had a d (ddddddd)
the second student had an o (ooooo)
the third student had a m (mmmmm)
<Dom>
Then. One lovely first grader had to deck out in my hat and my sunglasses and that big old bossy e. He went to the end of the word wagged his finger with all his might and told that o to “say your name!!” 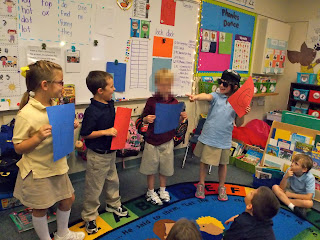 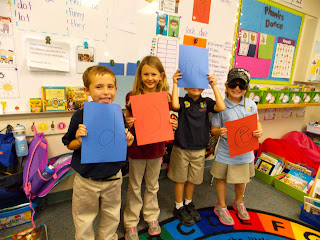 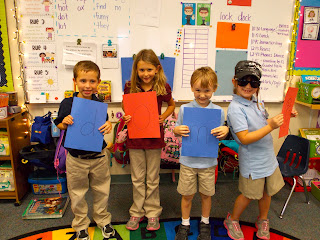 We went through this so many of my friends could have fun being that BOSSY ol’ E.
Afterwards, we completed a worksheet where my students first had to read the short vowel words and then add that mean old e to the end of the word, say to the vowel, SAY YOUR NAME, and then read the new word.
Even my kiddos who are struggling picked this up and LOVED it.
Now, the next day I introduced two of the baddest crooks I know. 😉
Shorty and Mr. Long 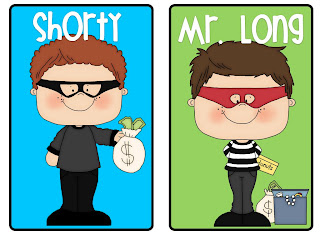 These two brothers STEAL words. However, Shorty only likes words with the short vowel sounds and Mr. Long only likes words with their LONG sounds.
I brought in a bag full of those oversized fake money pieces (made out of card stock) and put post its on the back and wrote a whole bunch of words with long and short vowels. I told the kids that last night, these crooks went on a hunt and found a bunch of words but when they got home, they dropped their bag and all their words got mixed up. (Insert the *gasp* that went throughout my classroom.)
I told my kids that we needed to help them sort their words and see who got the most words last night!
(they were MORE than willing to help)
I then dumped all the money on the floor and the kids came up one at a time picking a coin (the quarters went first– smart kids!) and reading the words. We put the coins on the board underneath either Shorty or Mr. Long.
Every time that bossy e appeared my kids would say, “LOOK IT’S BOSSY E– SAY YOUR NAME!!” ((they were really rooting for Mr. Long to win!!))
That day, Shorty won. However, the next day (due to a request, we played again) and Mr. Long won!
To go with this activity I created a literacy center that my students can not currently get enough of.
It’s called BUSTED!!
I put word cards on fat colored popsicle sticks along with some police officer cards and placed them into a cup. 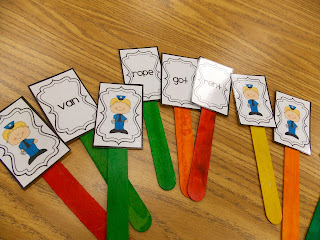 Students then got to choose if they were Shorty or Mr. Long.
We would pass the cup around taking turns pulling out one word and reading them. If it was their type of word (long vowel or short vowel) they could keep it!! 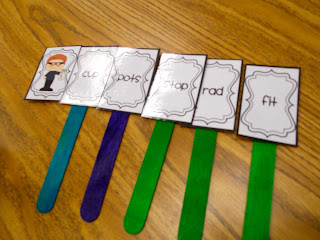 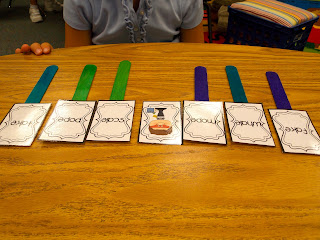 However, if they pulled a police officer, they were BUSTED and had to put all their words back into the cup!!
They LOVED this!!
After playing, they recorded their words on a recording page! 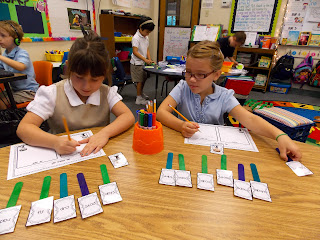 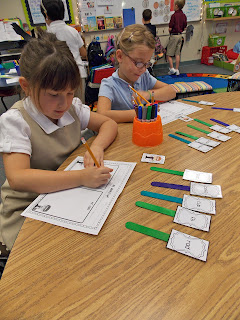 If you are interested in this game it is available in my Mastering CVCE Words Pack. Your students will LOOOOOOVE this! 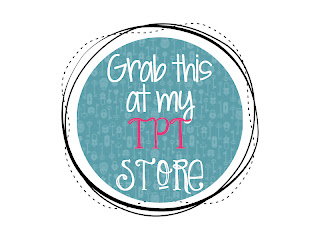