My class loves Science. They can’t wait for Friday to arrive to see what Science experiment we will complete. They moan and groan when they find out that we don’t have one planned for that given week. So, I have made it a point to have a Science experiment nearly every week.

The last few weeks we ventured into outer space and therefore we just had to make moon dough. It was a great lesson on solids and liquids and using adjectives to describe things.
I will warn you…. this one WAS messy.
I laid out my giant fabric drops and gave each child their own bin to play in but it still was messy. It only took us about 5 minutes to clean up but I know that some of you do not like messes! (Also remember I have a very small class so the mess was easily contained.)
Okay. Now that I have scared you off…. Here is what you need:
8 cups of flour
1 cup of baby oil
A mixing bowl
A measuring cup
and a spoon 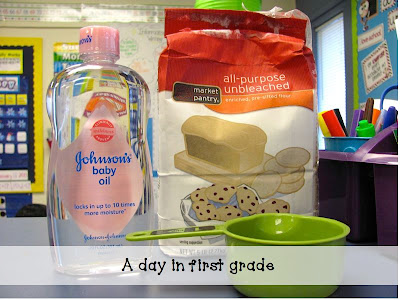 My students added in the ingredients and then mixed it up! (This took about 8 minutes.) 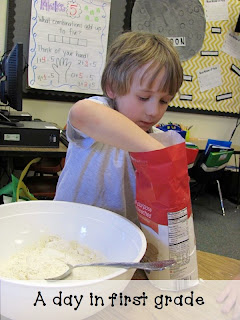 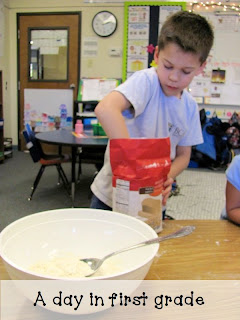 Then I gave each child a container and a handful of our Moon Dough. I took out our play dough toys and they got to “work.” 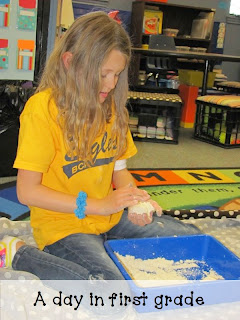 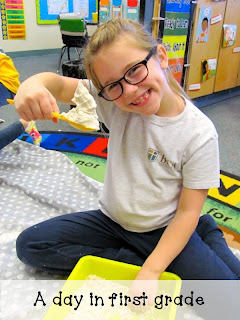 They played with our experiment for a good 15 minutes and then I had to stop them because we had to clean up. The first 5 minutes they were silent!  ((without being prompted!)) They absolutely loved this stuff and were thrilled when I sent it home with them in ziplock baggies! I wrote the “recipe” on the baggies so the parents could make more at home if they wanted to. 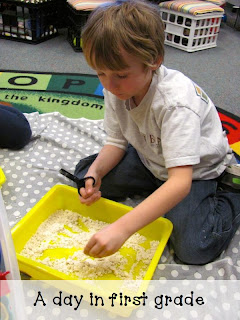 They say you can use this stuff for word work but I’m hesitant… I foresee a huge mess and a lot of, “are you making your words with the Moon Dough, ______?” However, as a Science experiment, it was a HIT!