Fractions, Estimating, Adding and More!
24 Feb, 2014. 2 Comments. . Posted By: Kristen Smith
We have been hard at work trying to master a few new skills. Currently in our small groups, a few of my groups are working on estimation. To better understand this concept, I put a bunch of bear counters into a glass jar. 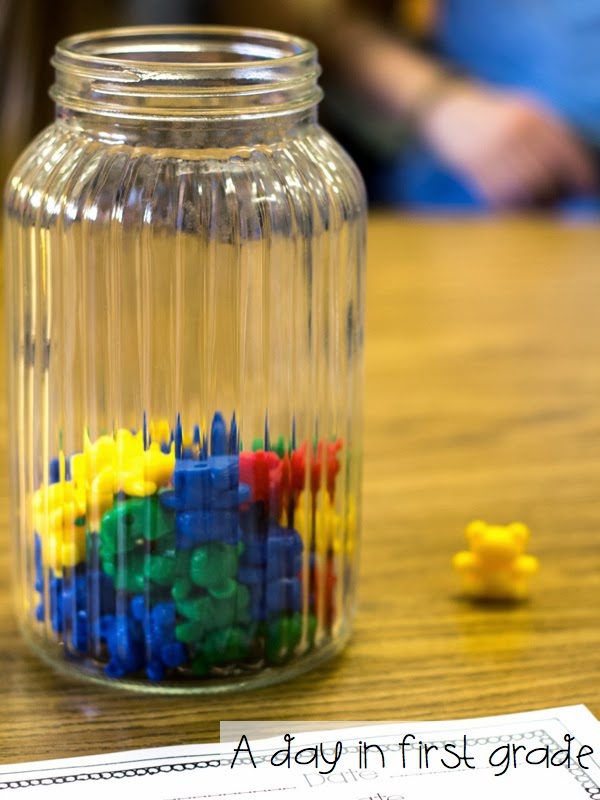 My students then each got to reach in and take out a LARGE handful of bears. (I had them cover up all of their bears so that they were not tempted to count them!) 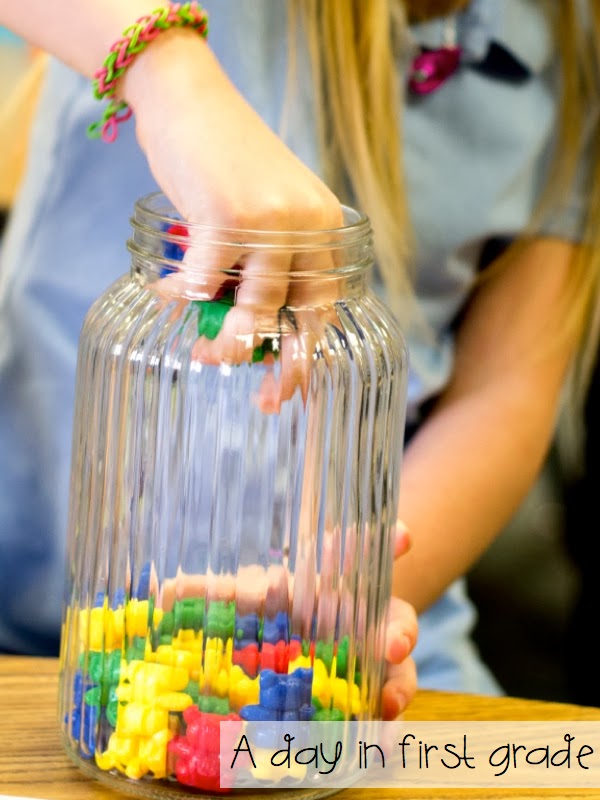 After they had their handful of bears, they estimated how many they had pulled out. We used our recording sheet to write down our estimations. 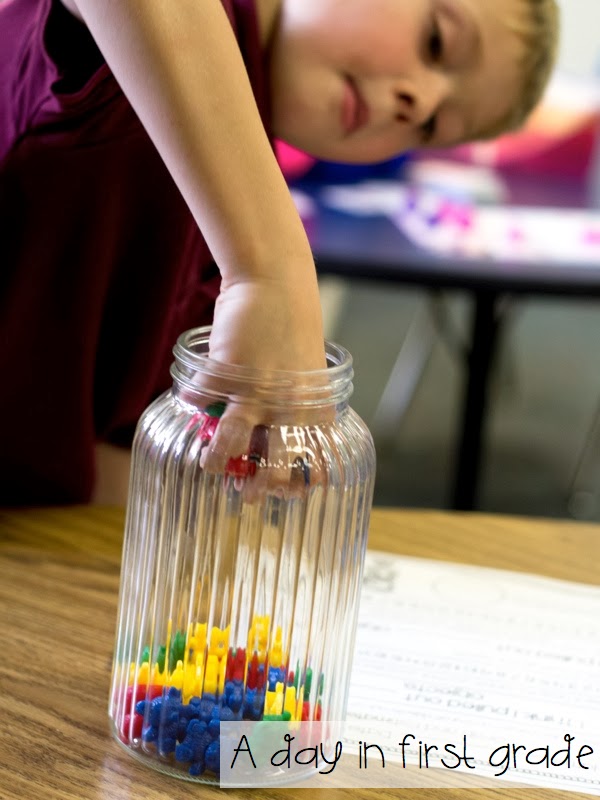 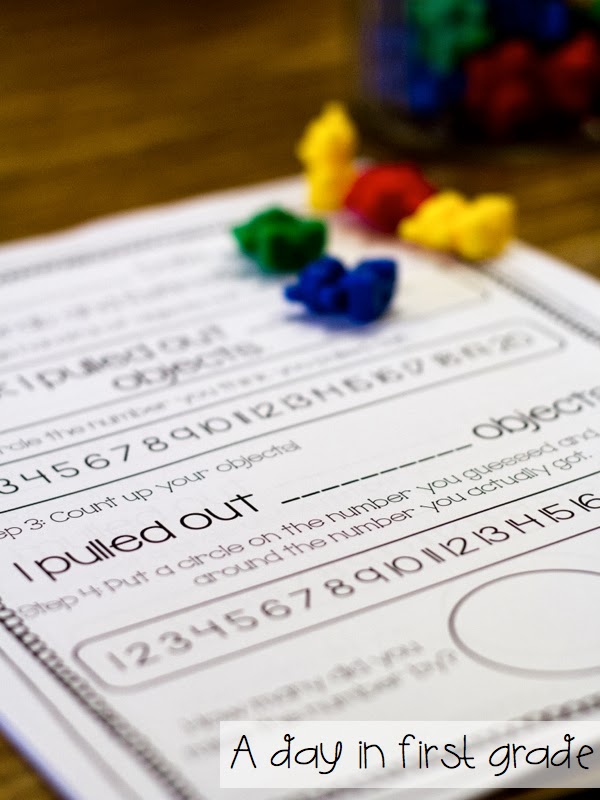 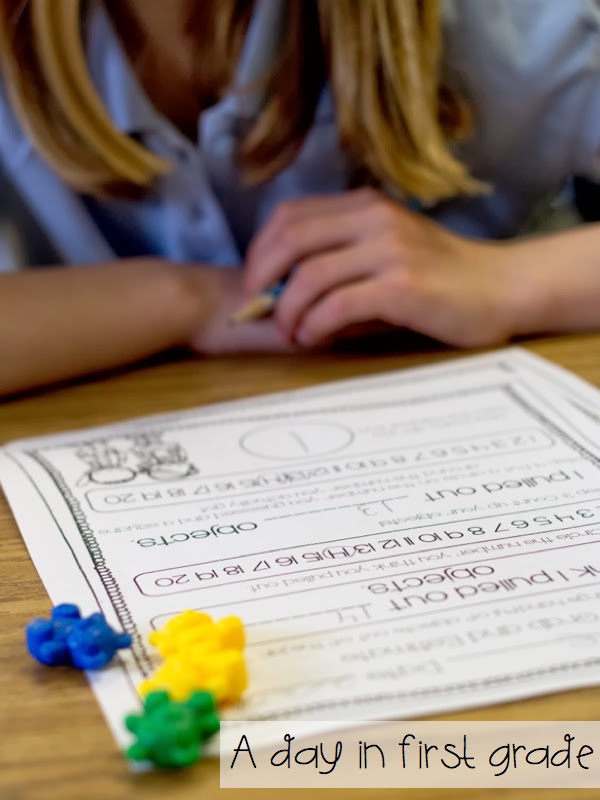 {this activity is found in my “Mastering Number Concepts” Pack}
Next week I will make this activity harder by putting in smaller objects!
We have also been working super hard at understanding what a fraction is. I enlisted the help of our dinosaurs to make this really hands on and fun. After learning what a fraction was, the next day we talked about different ways we could group objects to make different fractions. 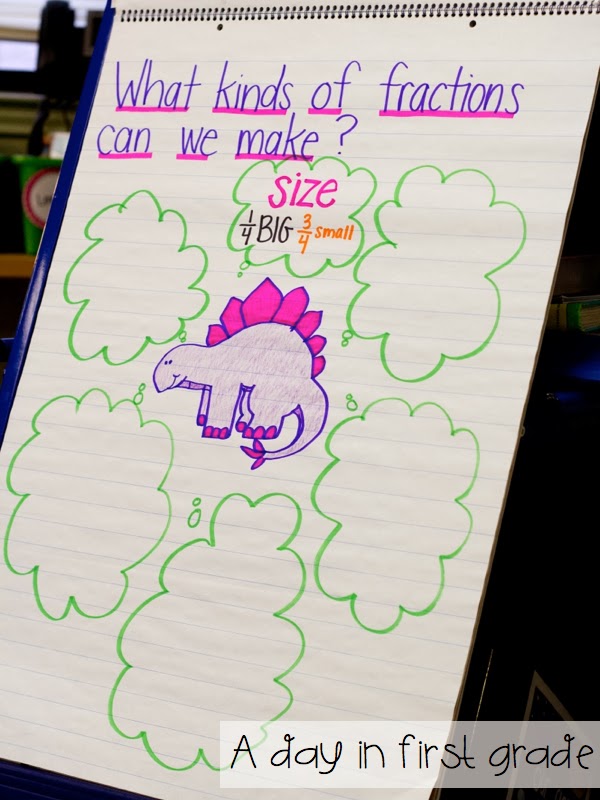 I started the lesson by having my students pass around this basket of dino ducks. 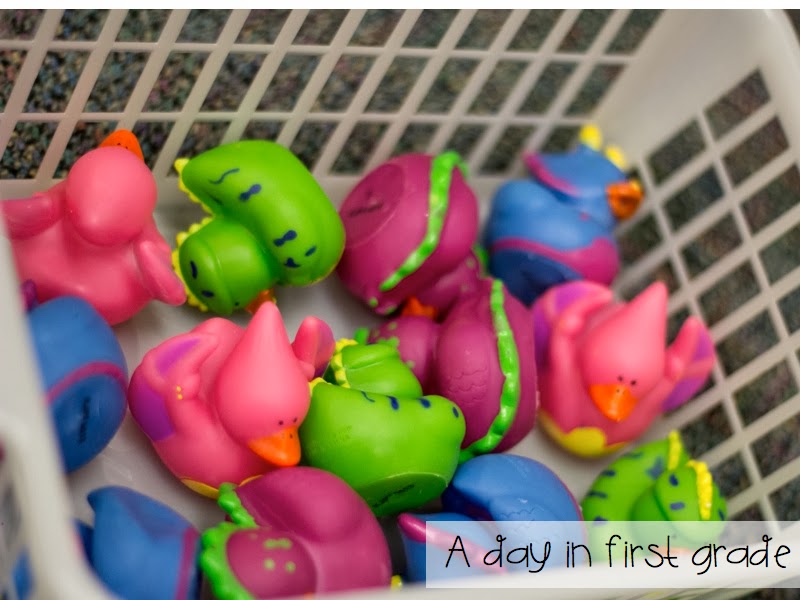 While passing around the ducks, they had to make observations about what they saw in the bucket. They noticed that the dino ducks were different colors, that they had different features, that some ducks were smaller than others and other observations like that. 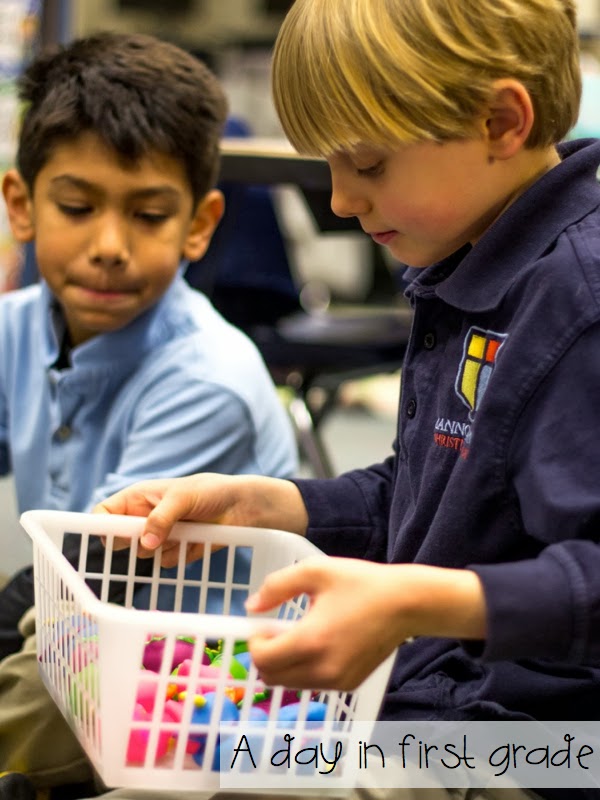 We then discussed the different types of fractions that we could come up with for the dino ducks. They said we could use:
Size
Color
If they had dots
If they had spikes
and many other ideas
We then practiced recording the fractions on our white boards. After they wrote their fraction, they turned to their friend and read it to them. It was great practice to hear them say things like “3/13 of the dino ducks were pink.”
After this whole group lesson, my students went back to their seat where a bowl of dinosaurs was waiting for them. 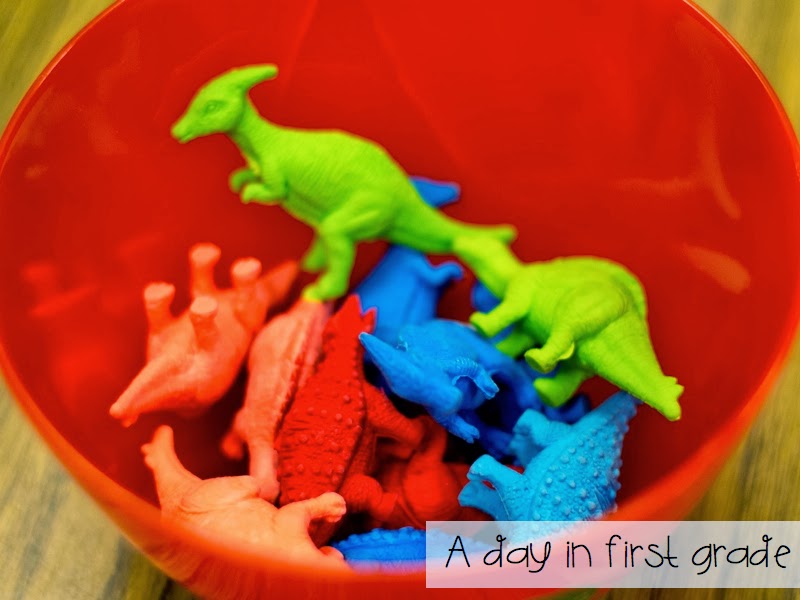 In groups, my students then had to apply what they had just learned about fractions to write fractions for their dinosaurs. 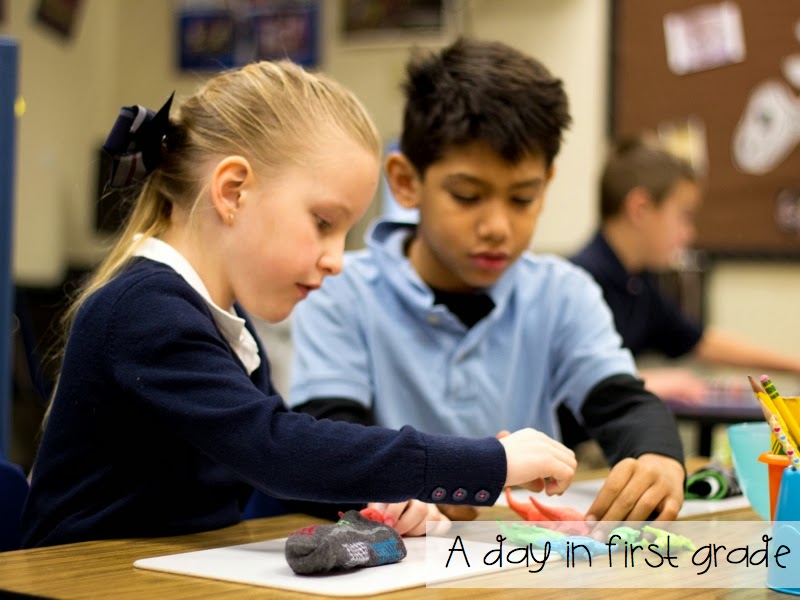 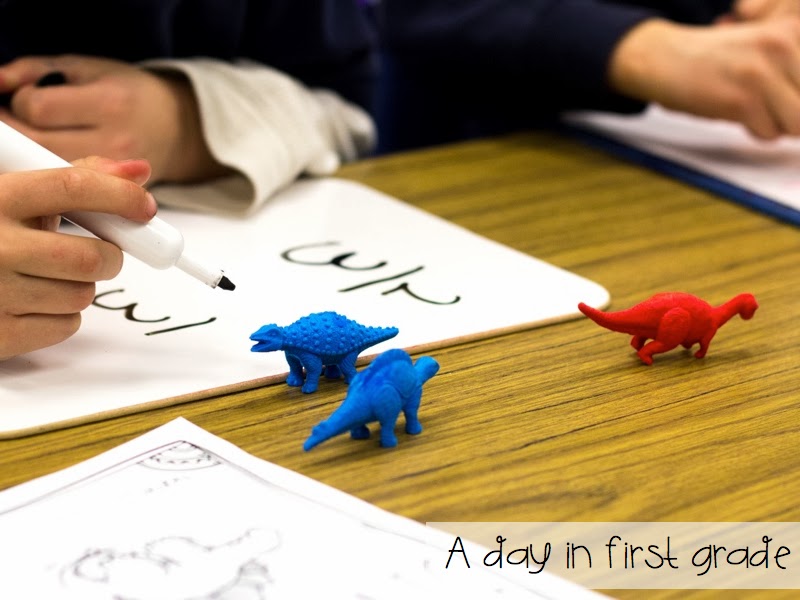 They then explained their fractions to their friends at other groups. 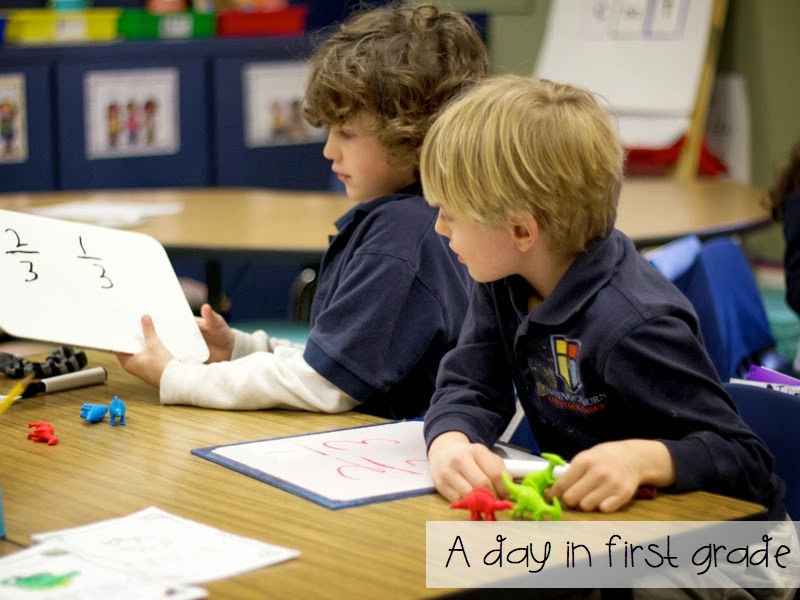 We did this activity two days in a row to help the concept stick. The second day, I added more dinosaurs to each bowl! 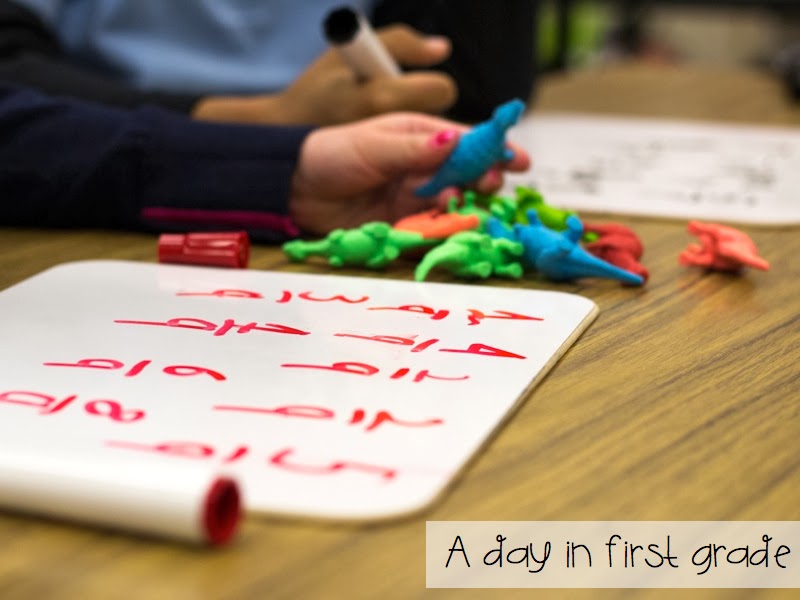 As you can see, they worked really hard to come up with their fractions and are really starting to understand what a fraction is and how to use fractions.
We also have been reviewing addition during our math bin time. Marsha, from a Differentiated Kindergarten has some amazing dinosaur centers that fit in so well with our theme. My students have LOVED using these centers to review addition. Their favorite center was the “I spy” center. They went back to it time and time again! 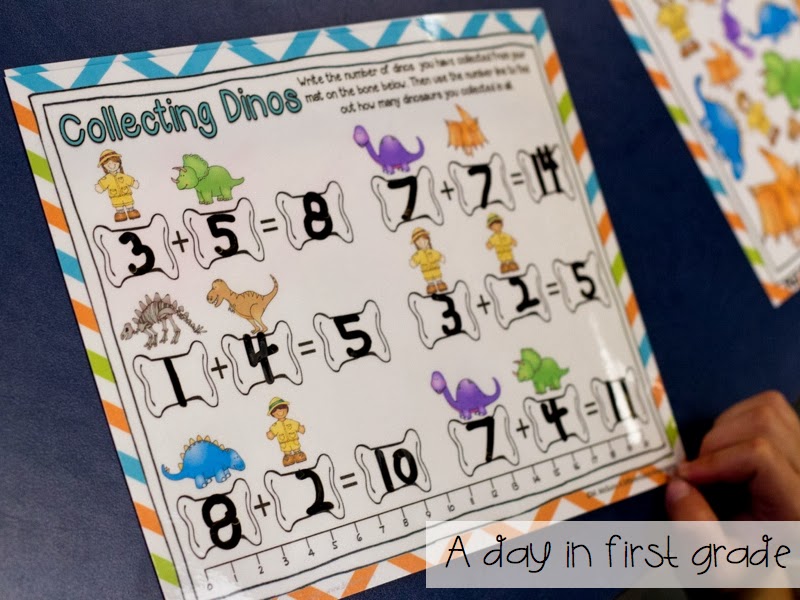 They also loved the spinner center that practiced mixed operations! 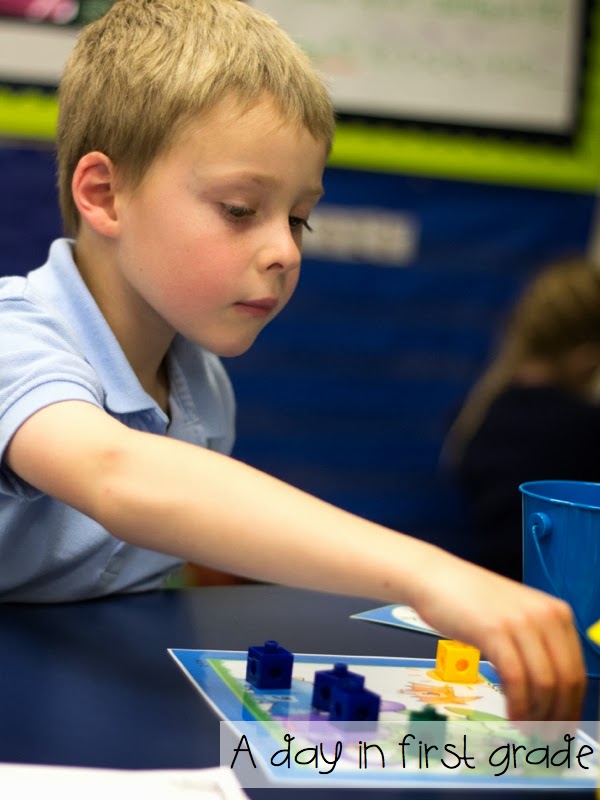 I love that by making lessons fun and hands on that the concepts stick with our students so much more. These three activities have helped my students so much with these somewhat difficult first grade skills. They thought we were just having fun and didn’t realize that we actually were working hard!
I hope that you are having a great week!